Filing a Personal Injury Claim Against the New York Government

Filing a Personal Injury Claim Against the New York Government 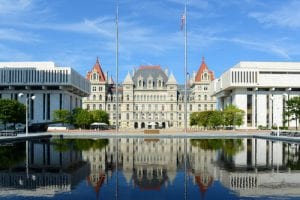 If you were injured due to the negligence or reckless actions of a government employee or on New York government property, you have the right to sue the government the same way you would sue a private individual.

The New York Court of Claims Act states that the government “waives its immunity from liability and action” and consents to be sued in court in the same manner as an individual. So, individuals who suffered injuries at the hands of the government can file a claim for basically anything that an individual could be sued for. This includes auto accidents, slip and falls, premises liability, medical negligence in a state facility, and more.

As of 2011, people can sue New York municipal governments if they can prove that the municipality had a “special duty” to the injured individual. To prove “special duty,” the plaintiff must prove that at least one of the following occurred:

Whereas most New York personal injury claims have a statute of limitations of up to three years, claims against the government abide by a different timeline.

If you were injured as a result of negligence on the part of a New York government entity, know that you may have a right to compensation. The personal injury attorneys at Hach & Rose, LLP have the experience and determination needed to help you take on government entities and win. Call our office at (347) 318-9604 or reach out to us online to schedule your free consultation today.