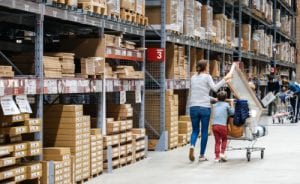 IKEA, a Swedish company that designs and sells affordable furniture which people can assemble at home themselves, has been the world’s largest furniture retailer for more than a decade. It is not uncommon for companies to occasionally manufacture furniture that proves to be dangerous, and recently IKEA has been forced to recall a number of its products because of hazards.

In 2017, ABC News reported that IKEA recalled 29 million MALM dressers in three-, four-, five- and six-drawer models, after the United States Consumer Product Safety Commission (CPSC) said that IKEA had received 186 reports of incidents with these items, including 90 injuries and eight deaths. As recently as October of 2019, IKEA recalled thousands of MATVRA bibs for representing a choking hazard, after two reports of the snaps on the bibs coming off.

IKEA sells many different kinds of furniture, and no one product is more dangerous or prone to accidents than another. Some of the most popular IKEA products include:

In June 2019, CBS News reported that consumer advocates were accusing IKEA of not doing enough to get dangerous, recalled dressers out of American homes. IKEA responded, saying  that the company had distributed over a million wall-attachment kits, and issued 400,000 refunds for returned dressers, but added that it would continue to try to educate customers about the recall and the “importance of securing chests and dressers to the wall.”

IKEA is far from the only company to manufacture dangerous or defective furniture, and you should not hesitate to contact Hach & Rose, LLP when you have a piece of furniture that was purchased from another manufacturer. Our firm is ready and able to take on companies of all sizes, and we will not be afraid to take on any company that produced a product that caused you harm.

Were you or someone you love hurt as the result of a dangerous or defective piece of furniture in New York? Contact Hach & Rose, LLP right away by calling (212) 779-0057 or get in touch with us online to take advantage of a free consultation. We can explain your legal options in a clear and concise manner. Let our knowledgeable New York defective product attorneys work tirelessly to get you full and fair compensation for your losses.