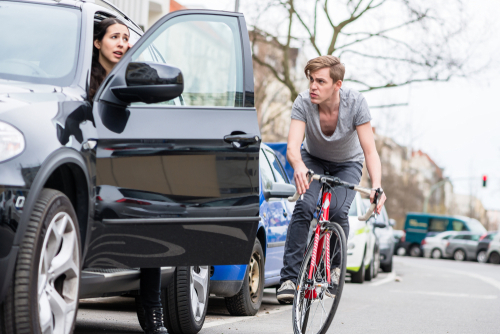 “Dooring” accidents are a type of traffic collision that takes place when a bicyclist or other road-user crashes into a motor vehicle’s open door. In some cases, these accidents are caused by a vehicle occupant failing to check for oncoming traffic before opening the car door. In other cases, the vehicle occupant may have negligently left the car door open. To avoid colliding with the door, bicyclists or motorists will sometimes quickly swerve to move out of the way. This sudden swerve may cause a secondary collision, as the bicyclist or motorist could potentially collide with another vehicle in the next lane over.

In the state of New York, dooring accidents have become such a prevalent issue that policymakers have developed laws designed to prevent them. According to the New York Vehicle and Traffic Law, Sec. 1214:

Statistics show that dooring accidents accounted for almost a fifth of all bicyclist injuries in 2011. Additionally, eight bicyclists were killed in dooring accidents between 2006 and 2016 in New York City. Although laws have been written with the intent of reducing the incidence of dooring accidents, they are still a major point of concern for bicyclists within New York. Whether you are a motorist or a bicyclist, there are safety measures you can take to help reduce your risk of being involved in a dooring accident:

In areas where traffic volumes are high, being involved in a dooring accident can be devastating for a bicyclist. In fact, it can even be fatal. If you or someone you love has been hurt in a dooring accident, contact Hach & Rose, LLP to speak with an experience New York bike accident lawyer at (212) 779-0057 today.