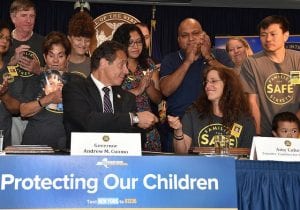 The city’s school-zone camera program was expanded in July, adding 40 cameras across the city each month and the operating hours for the systems were expanded. The number of cameras will have expanded from 140 cameras to 750 camera systems by next June.

Perhaps the most significant factor in reducing the number of traffic accidents in these zones across the city was not just the number of cameras but the hours in which they operate. With the systems online and working from 6:00 a.m. to 10:00 p.m. (not just during school hours), the statistics show that traffic incidents have dramatically decreased.

Drivers are clearly slowing down, as proven by the dramatic reduction in the number of tickets issued, and the number of accidents at these intersections. Statistics show that there was a more than 10 percent decrease in collisions across the five boroughs from July to October as compared to the same time period in 2018.

“Speed cameras work. Period. They change driver behavior and cause people to slow down, protecting New Yorkers from injury and death in traffic collisions.”

While total crashes increased in 2015 and 2016, school zone cameras have largely disrupted the trend. With the numbers returning so favorably, it is only a matter of time until city politicians realize that red light cameras are not just a source of ticket revenue, but actually encourage drivers to slow down. This behavioral adjustment undoubtedly saves lives.

Unfortunately, accidents still happen across New York City. Whether they are caused by reckless driving, distracted driving, aggressive driving, or any one of the countless common factors that result in severe injury accidents, innocent people still get hurt far too often. When this happens, they have the right to seek fair compensation from the individual who caused them harm.

Hach & Rose, LLP has built a reputation in New York as being the firm to turn to if you’re hurt in a car accident, truck accident, bike accident, or a pedestrian crash. Our trial lawyers have been recognized for their compassionate treatment of their clients and aggressiveness at the negotiating table and in the courtroom. If you’ve been hurt, our team can help. Call us at (212) 779-0057 or fill out a contact form to discuss how we can help you today.