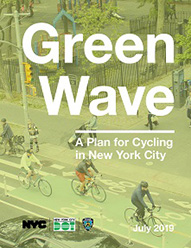 On July 25, 2019, New York City Mayor Bill de Blasio released the $58.4 million “Green Wave: A Plan for Cycling in New York City.” Just four days later, Streetsblog New York City reported that the death of a 30-year-old bicyclist near the intersection of Third Avenue and 36th Street was the 18th cyclist fatality of the year, one year after the New York Police Department (NYPD) reported that 24 bicyclists were killed in crashes involving motor vehicles.

The Green Wave plan calls for 30 miles of protected bike lanes to be built annually, an increase from the current rate of approximately 20. The plan also seeks to build 75 miles of bicycle infrastructure in 10 Bicycle Priority Districts (seven in Brooklyn and three in Queens) by 2022, and to have one of every 10 trips in New York City be taken by bicycle by 2050.

The plan states that the Department of Transportation (DOT) will install more than 20 miles of protected bike lanes in all five boroughs in 2019. There will be a goal of 75 miles total in Bicycle Priority Districts by 2022.

The Green Wave plan also called for immediate actions such as doubling the current Citi Bike service area by 35 miles and tripling the number of bikes to 40,000 by 2023 (the plan stated that Citi Bike is the largest bike-share system in the country, with 82 million Citi Bike trips since its launch and a record of 85,000 trips per day). The borough-wide dockless bike-share on Staten Island will be launched in 2019, and the city will increase its annual target of protected bike lanes (PBLs) from 10 PBL lane miles to 30 PBL lane miles. Overall, the city seeks to install more than 80 miles of protected bike lanes by the end of 2021.

The name Green Wave is derived from the event in which traffic lights are coordinated to allow people to pass over multiple intersections without stopping because of multiple green lights, but such light patterns are customarily more tailored to motor vehicles traveling at much faster speeds than bicycles. The DOT will experiment with a green wave for bicyclists that may help reduce the number of red-light crashes in the city.

The plan also states that DOT will implement traffic calming treatments at 50 intersections with a high number of bike injuries in 2019. The NYPD will also extend elevated enforcement of blocked bike lanes and hazardous driving violations, while cyclists will no longer be ticketed after fatal crashes.