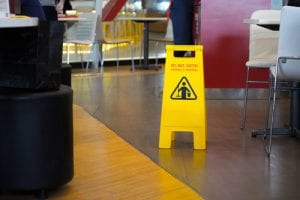 The New York Daily News reported on September 21, 2019, that one-time street boss of the Colombo crime family “Tommy Shots” Gioeli won a $250,000 settlement for an August 2013 slip and fall accident while playing ping-pong inside Brooklyn’s Manhattan Detention Center. His injuries required surgery and a month-long hospitalization, but the Daily News reported that federal prosecutors were seeking to use the settlement to cover $360,000 in court-ordered restitution the now-67-year-old owed to a bank and a fur store.

This past June, the Associated Press reported that studies published in the Journal of the American Medical Association showed that fatal falls had nearly tripled in older Americans in recent years, rising to over 25,000 deaths annually. Analysis looking at 16 years of vital statistics in the United States showed that fatal falls increased from 8,600 in 2000 to 25,190 in 2016, and CDC data showed there were nearly 26,440 fatal falls in Americans 75 years of age and older in 2017.

Both of these stories demonstrate that older Americans are far more likely to fall, but older individuals are not the only ones who can be hurt in such accidents. So, who is responsible for your safety when you’re in a store, office building, public place, or private property? Read more on defective conditions and constructive notice in New York.

What is Constructive Notice?

Unless it can be proven that a property owner created a defective condition, an injured person will need to prove that the owner had either actual knowledge or constructive notice of a defect. The Court of Appeals of the State of New York held in Gordon v. American Museum of Natural History, 67 N.Y.2d 836 [1986] that “a defect must be visible and apparent, and it must exist for a sufficient length of time prior to the accident to permit defendant’s employees to discover and remedy it” to constitute constructive notice.

Constructive notice can be established by proof of a “recurring condition,” which is actual knowledge of an ongoing defective condition. A property owner may be able to employ what is known as the “storm in progress” defense, which the First Department Appellate Division of the Supreme Court of New York ruled in Hussein v. New York City Transit Authority, 266 A.D.2d 146 [1st Dep’t 1999], “Just as landowners have no duty to clear outdoor public spaces while precipitation is still falling, they are not required to provide a constant, ongoing remedy when an alleged slippery condition is said to be caused by moisture tracked indoors during a storm.”

If you suffered severe injuries or your loved one was killed in a slip and fall accident in New York City, you will want to speak to an experienced injury attorney to discuss your rights and legal options. Make sure you contact Hach & Rose, LLP as soon as possible.

Our firm can fight to prove another party’s negligence and help you recover every last dime of compensation you are entitled to. We can examine your case when you call (212) 779-0057 or contact us online to schedule a free consultation.