NBC 10 in Philadelphia has reported that the death toll has risen to six after the Amtrak derailment last night.  The Amtrak train, heading to NYC from Washington D.C., derailed shortly after 9pm EST.  Each of the seven cars left the tracks completely during the devastating accident.

The accident is reported to have claimed the lives of six individuals and injured over 140 people.  The Temple University Hospital took in 54 patients, 25 of which remain hospitalized.  Temple’s chief medical officer Dr. Herbert Cushing reports that an additional 8 patients remain in critical condition.

Mark Sokoloff of Hach & Rose, LLP, who has over 25 years experience dealing with railroad related deaths and injuries, commented on the accident:

“This is a tragic accident and my heart goes out to the victims and their families.  Along with many others, I have spent my career as an advocate for railroad safety and have represented hundreds of railroad employees and passengers.  As is all too often the case, accidents like this could have been prevented if safety precautions were followed.  Please read the following overview of the how PTC – Positive Train Control may have prevented this accident”

Positive Train Control, enacted by Congress in 2008 as part of The Rail Safety Improvement Act, was mandated to be implemented by Major Passenger and Freight Carriers like CSX, Amtrak, North Burlington Central, and Consolidated Rail, to name a few, by December 31, 2015. A Positive Train Control computer system on Amtrak may have prevented the North East Regional Train 188 tragedy. Congress must act now to re- enforce, as well as implement, The Rail Safety Improvement Act of 2008  (RSIA08., P.L.110-432) for Passenger Commuter Trains like  the L.I.R.R, Metro-North, N.J Transit and Amtrak.

According to the Federal Railroad Administration (FRA), an average of 200 derailments and 205 train collisions, resulting in 422 injuries and 12 fatalities, occurred annually from 1998 to 2009, excluding the accidents at railway crossings, like the Valhalla N.Y accident. The majority of train related fatalities are due to interactions with vehicular traffic at road grade crossings and in 2009 alone there were 247 fatalities.

PTC is designed to prevent “train to train collisions, over speed derailments, incursions into established zones by vehicles, and movement through a switch left in the wrong position.” Railroads across the country are mandated to design a PTC system “best suited” for the Carrier’s need to prevent Railway derailment as a result of a fouled  track or excessive speed.

The Amtrak Train 188 occurred close to Frankford Avenue and Wheatsheaf lane approaching a known dangerous curve in the tracks.

Amtrak trains travel within The North East Corridor at speeds exceeding 100 miles an hour. If this derailment was caused by excessive speed, a positive train control system would have reduced the train speed in this urban and residential area automatically, and would have likely prevented this tragedy. 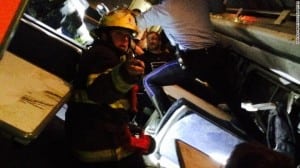 Former U.S. Rep. Patrick Murphy shared this photo that showed a firefighter inside the train.

The question that is posed by the North East Regional Train 188 Disaster is how close is Amtrak in their PTC design to prevent future speed related derailment before the 12/31/2015 deadline?

The firm of Hach & Rose, LLP, urges all Amtrak employees and their families to take advantage of the Amtrak Employee Assistance program. The firm is offering free FELA and benefit consultations through our website www.unionlawfirm.com or by calling (212) 779-0057.

If you or a family member was involved in this tragic accident, whether as a passenger or a worker, please contact Hach & Rose, LLP, to learn more about your rights and the legal action that may be available to you. To speak with one of our attorneys today, please call (212) 779-0057.

Recent Posts
How To Measure Shared Fault in A Car Accident What Not to Say in A Slip and Fall Investigation When Can I Be Compensated for a Dog Bite? How To Prove My Landlord’s Responsibility for My Accident Four Ways to Prevent Truck Accidents  How Your Legal Team Will Track Down a Hit and Run Driver Preventing Slips and Falls in Winter Attorney Spotlight: John Blyth Five Ways to Prove Your Traumatic Brain Injury Could your baby formula be dangerous?
Categories