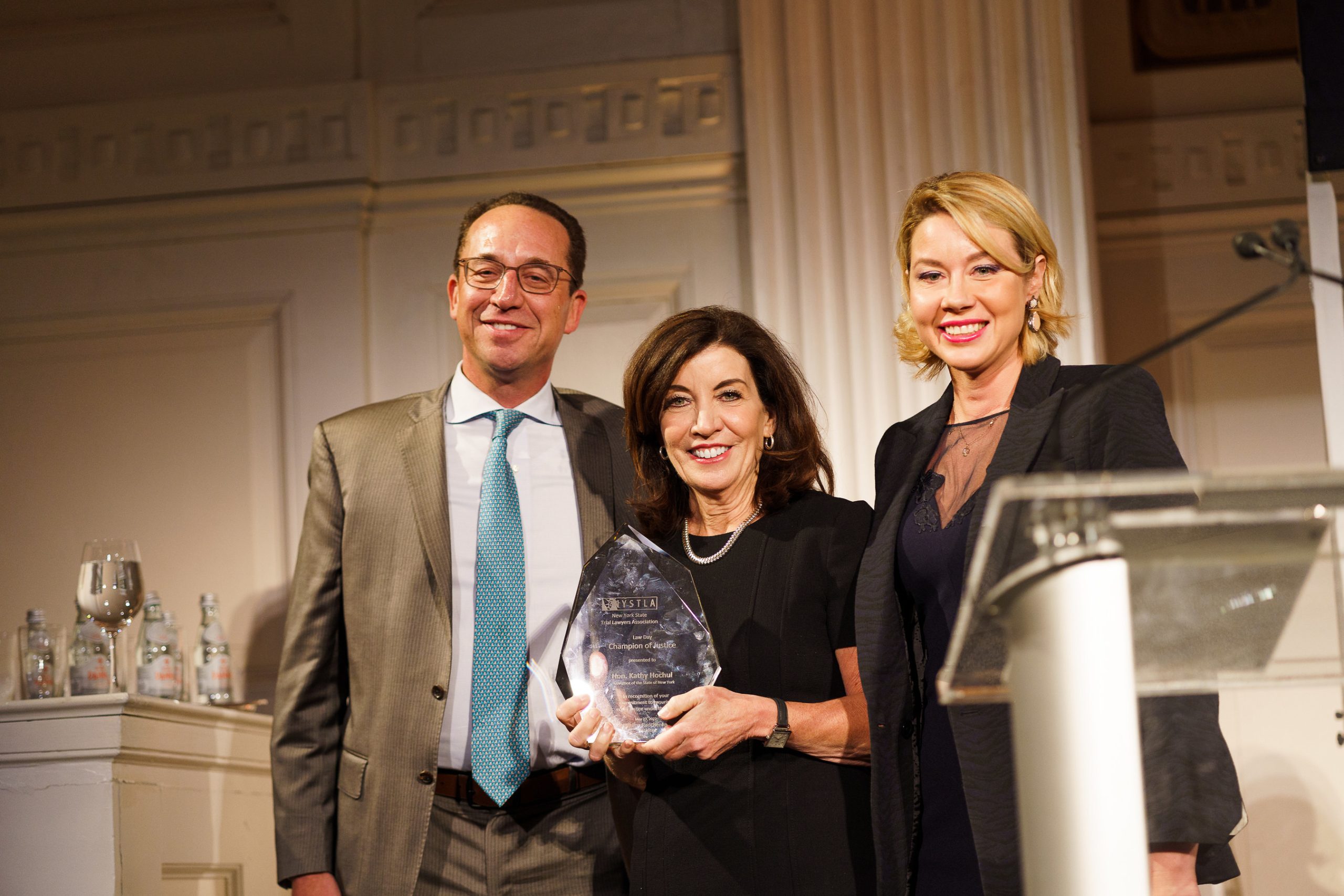 The in-person event had been postponed due to COVID-19, and while members were unable to convene in person during the pandemic, they continued working virtually to promote legislation for the benefit of their clients. As Mike Rose noted in his speech, one of the biggest victories the NYSTLA achieved during the pandemic was the repeal of the COVID immunity executive order, which was issued by then Governor Andrew Cuomo. By successfully blocking the legislation, the NYSTLA helped to protect New Yorkers from hazardous conditions in healthcare facilities.

Mike Rose also praised the integral role the NYSTLA played in the codification of two new laws: the “Speaking Agents” law, which overrules the former limitations on employees’ out-of-court statements, and the Insurance Disclosure Act, which requires defendants in civil cases to divulge information about insurance coverage that could be used to settle a judgment. Defendants have 90 days from the date they answer a complaint to disclose this information.

“Without NYSTLA’s vigilance and hard work, our clients’ voices would never be heard in Albany,” Mike Rose said of the organization.

The NYSTLA’s roots can be traced back to more than 60 years ago. Initially founded by a group of 20 trial lawyers who desired a forum for plaintiff’s attorneys, the association grew over the decades to approximately 3,500 members.

The association’s mission is “to promote a safer and healthier society, to assure access to the civil justice system by those who are wrongfully injured and to advance representation of the public by ethical, well-trained lawyers.” The NYSTLA is dedicated to ensuring that victims of personal injury are able to freely exercise their constitutional rights in the civil justice system.

Today, Hach & Rose attorney Halina Radchenko is the president of the NYSTLA. During Halina’s tenure as president, three new laws have been passed, including the Insurance Disclosure Act and the Adult Survivors Act (ASA). The NYSTLA is currently advocating for the passage of two other laws that would benefit plaintiffs, the Grieving Families Act, which would allow families to recover emotional, non-financial damages if their loved one was killed due to wrongful death, and the Consumer Good Faith Act. The Grieving Families Act was recently passed by both the New York Senate and State Assembly, and is expected to be signed into law by Governor Hochul.

At Hach & Rose, LLP, our New York sexual abuse lawyers are committed to protecting victims of sexual abuse. We will be ready to investigate your case and work to uncover whether the perpetrator or negligent third-party could be held accountable through criminal charges, a civil lawsuit, or both. If you or a loved one suffered any form of sexual abuse, don’t wait until it is too late to get justice. Contact us for a 100% free and confidential consultation.