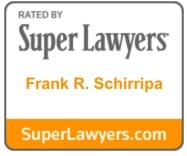 Frank R. Schirripa focuses his practice on representing institutional investors – predominantly Taft-Hartley pension and benefit funds – that have been damaged as the result of securities fraud or corporate malfeasance. Additionally, Mr. Schirripa represents classes of investors, consumers and employees who have been damaged by unfair business practices. Throughout his career, Mr. Schirripa has specialized in handling highly complex multi-party litigation in federal and state courts throughout the United States. Prior to becoming a partner at the firm, Mr. Schirripa was a Senior Associate at Horowitz, Horowitz & Paradis, where he practiced securities and consumer class action law. Mr. Schirripa began his legal career at Schoengold Sporn Laitman & Lometti, P.C.

Mr. Schirripa was one of the lead attorneys in In re SPX Corp. Securities Litigation, 3:04-CV-99 (W.D.N.C.), where the Court commended class counsel for its “skill perseverance[,] … diligent advocacy” and “aggressive representation” of the class in achieving “from a financial standpoint. A very fair settlement” aggregating $10 million, or approximately 22 percent of the maximum recoverable damages, noting that class counsel is among the “leading attorneys in the country in the area of class actions” and is “extremely competent” and “very experienced.”