Andrew Torres was injured while working on a construction site. He suffered four broken vertebrae. See his story, and other former clients’ stories, on our testimonials page.

If you are a construction worker who was injured on the job like Andrew was, contact Hach & Rose, LLP at (212) 779-0057 to speak with an experienced lawyer today.

Today, New York Attorney General Eric Schneiderman announced the indictment of Rensselaer County District Attorney Joel Abelove with official misconduct and perjury in the police shooting case of Edson Thevenin.  This marks the first time that a New York state district attorney has been charged with failing to investigate a crime and refusing to cooperate with the Attorney General’s office.

An order signed in July of 2015 by Governor Andrew Cuomo appointed the Attorney General as a special prosecutor in cases where unarmed civilians are killed by police officers. The indictment charges that District Attorney Abelove intentionally and covertly rushed the case before the grand jury to avoid involvement from the AG’s office in order to ensure that the officer involved, Sergeant Randall French, would be cleared of wrongdoing.

Attorney Mike Rose of Hach & Rose, LLP is already representing the victim’s family in a civil case against the city of Troy and the officer responsible for the unarmed man’s death. The lawsuit was filed in federal court on behalf of Cinthia Thevenin and her two sons following the fatal shooting of 37-year-old husband and father, Edson Thevenin in an April 17th encounter with Troy police officer Randall French. The lawsuit alleges that the city of Troy and the officer, Sergeant Randall French violated Thevenin’s civil rights in the incident which left Thevenin dead.

Thevenin was stopped at in the early morning on April 17th by Sergeant French on suspicion of drunk driving. After a short pursuit, the officer’s legs became pinned against his vehicle, which according to the officer, led him to feel in danger, and caused him to open fire on Thevenin’s vehicle. The officer subsequently fired eight shots into the windshield of Thevenin’s car, killing him.

A grand jury cleared the officer of wrongdoing five days after the shooting, but two witnesses at the scene told law enforcement and the district attorney that it did not appear that the officer was in immediate danger when he shot and killed Thevenin. The DA failed to subpoena the two witnesses during the grand jury trial of officer French.

Attorney General Schneiderman issued this statement regarding District Attorney Abelove’s actions: “As we allege, District Attorney Abelove’s actions violated the law and undermined a criminal investigation. The Governor’s Executive Order was designed to restore public confidence in our criminal justice system – yet the actions we detail today only served to further erode that confidence. My office will continue to work collaboratively with law enforcement agencies across the state, including district attorneys, to ensure fair, comprehensive, and independent investigations of every case within our jurisdiction, so that families like the Thevenins get the answers they deserve.”

We are proud and humbled to announce that Hach & Rose, LLP has moved to a new, larger space at 112 Madison Avenue, 10th floor. Over fifteen years ago, we started our law firm with little more than a vision and a tiny low-rent office. Our vision was to become one of the best personal injury law firms in New York; defining “best” in terms of providing the best possible representation to each and every client who trusted us with their case. There were three of us in the beginning – Greg, Mike and Filomena (Filomena was our first employee who now runs the office). Even with limited resources and only a handful of cases, we never lost sight of our vision.

Fifteen years later, we have proudly seen our vision come to fruition through the thousands of people who have trusted us to represent them, and the achievement of obtaining over $250 million in verdicts and settlements on their behalf. This success has allowed us to grow into a powerful law firm – with unlimited resources, new state of the art office space, and a talented staff of attorneys and support personnel – to fight the largest insurance companies and corporations.

The larger we grow, the more compelled we are to stay true to our original vision to provide the best possible service to our clients. Large or small, we commit to preparing each and every case for trial which enables us to maximize recovery for our clients. This is not a small or subtle commitment to our clients. It is the difference between accepting a “low-ball” offer from an insurance company of $50,000 or doing the hard work to obtain a verdict or settlement for over $500,000.

Recent examples include: a jury verdict of over 12.8 million dollars for a woman injured by defective construction, a jury verdict of 1.4 million for an injured railroad worker, and a jury verdict of $225,000 for a person injured in an automobile accident. These jury verdicts let insurance companies and those who defend the negligent know that if the settlement offer is not ideal for our client, we will take the case to trial.

We deeply appreciate the support of each and every client who has trusted us with their case over the past 15 years. We understand that without them, we would not exist. We look forward to serving people by investing our best efforts to obtain the best possible outcome on their behalf. 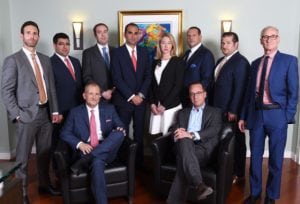 The team at Hach & Rose, LLP are proud to be featured in New York magazine’s “New York’s Leading Lawyers, 2017”.  For the past fifteen years, the firm has distinguished itself as one of the most accomplished and preeminent personal injury law firms. The article sums up the firm’s goals and accomplishments: “Founded on the simple principles of always placing the client’s needs first and aggressively pursuing the highest recovery possible, the firm sets itself apart. They have accomplished in excess of $250 million in jury verdicts and settlements with the proven ability to effectively advocate on behalf of their clients.”

In addition, partners Michael Rose and Greg Hach were asked about their commitment to their clients. Senior Partner Michael Rose told the magazine: ““regardless of the case value, if we commit to taking on a case the efforts are always the same.”

Senior Partner Greg Hach added: “Each of our cases is prepared with the assumption it will ultimately resolve in the courtroom. Defendants understand this and that places us in the best position to achieve remarkable recoveries,” notes Managing Partner Gregory Hach. “Some of our most notable results have been achieved after a client, frustrated by the legal process, hired our firm to fight for them. One client that had been pressured by a previous attorney to settle for less than $100,000 recovered over $2 million after retaining Hach & Rose. An injured construction worker told us that his attorney recommended a $60,000 settlement. We obtained a $2 million settlement.” Such successes are bittersweet explains Hach, “it’s satisfying to know the client achieving the greater recovery will have a better life, but for every client this describes, there are countless others taking the lower settlement amount. That is tough to swallow.”

The entire New York magazine feature can be read here.  If you or a loved one has been hurt in an accident in New York, the entire team at Hach & Rose, LLP are prepared to help you fight for what you rightfully deserve. Contact us at (212) 779-0057 today.

New Video FAQ: How do you know if you have a personal injury or workers’ comp claim?

In a new video FAQ, attorney David Cheverie discusses how you can tell if you have a personal injury or workers’ compensation claim. Watch the video above or contact us to discuss your case.

The trial team of Michael Rose and David Cheverie from Hach & Rose, LLP secured a $12.8 million dollar verdict on behalf of a security officer in New York City.  The officer was injured by a negligently installed door closing mechanism in the new wing of a hospital that was under construction. The individual suffered a severe neck injury as she was passing through the doorway.

The six-week trial put the spotlight on the contractors hired to install the door. While they claimed they were following the instructions of the architect, so they were not responsible for the injury, the team at Hach & Rose were able to prove that it was, in fact, their negligence that caused the injury to the worker. The jury deliberated for less than 30 minutes before delivering the verdict in favor of the client.

To learn more about this case and the firm’s victory, read the press release here. If you have been injured in an accident, contact the experienced New York City workplace injury attorneys of Hach & Rose, LLP today.

Must Know Info: Prior injury does not mean your recovery should be reduced

In a new article posted to our Must Know Info page, New York City personal injury attorney Michael Rose discusses how having a previous injury should not have any effect on a new injury’s value in a settlement or verdict.

Insurance companies and their defenders would argue that because a person had, for example, a previous back injury, a new injury to that person’s back is worth less in terms of their financial liability. This is untrue. Whether the injury existed before the accident or not is irrelevant since the cost of treating it after the accident is the issue at hand.

For more in-depth analysis on this topic, read Michael Rose’s post, Prior injury does not mean your recovery should be reduced.

If you suffered a repeat injury, do not let the insurers sell you short. Contact a personal injury attorney from Hach & Rose, LLP, by calling (212) 779-0057 to get the representation need after being injured in an accident.

What do I need to know as a construction worker if I’m injured on the job?

In this week’s video, attorney David Cheverie of Hach & Rose, LLP, discusses the important steps you should take following an accident on a construction site, including documenting the incident thoroughly and quickly contacting an attorney who specializes in construction-related accidents.

About the Team at Hach & Rose, LLP

At Hach & Rose, LLP, we are dedicated to helping accident victims pursue the financial compensation, emotional closure, and justice that they need if they were injured by another person’s negligence or recklessness. Click here to read more about our firm, our commitment to our clients, and some of the recognitions we’ve received in the past.

What do I need to consider before I hire an attorney for the first time?

Gregory Hach of Hach & Rose, LLP, discusses the importance of researching an attorney’s past cases and reputation before hiring them as your legal representative. Watch this video to learn more about the important questions to ask a lawyer before retaining their services.