New Springville, NY (April 19, 2019) – Two people were reported to have sustained injuries, one seriously, after a vehicle went off a roadway, subsequently crashing into a tree and a house on Thursday night, April 18th. According to authorities, the incident took place around 8:20 p.m. when the vehicle involved crashed into the home located at 227 Merrymount Street for reasons that have not been determined.

At this time, police are unsure of how many vehicles were involved in the accident as one other car was at the scene but removed shortly after the crash. The vehicle that went off the road struck the tree first and only damaged the railing of the home. Emergency medical crews along with the FDNY and NYPD were dispatched to the scene where responders had to cut away the vehicle to remove the driver.

An FDNY spokesman stated that both occupants of the known vehicle were taken to Staten Island University Hospital in Ocean Breeze where one is being treated for serious but non-life-threatening injuries. The other party is believed to have sustained only minor injuries. An investigation into the cause of the crash and the possible involvement of a second vehicle is currently being conducted. 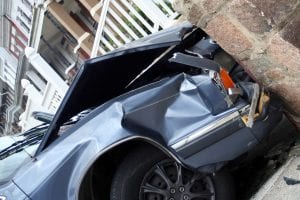 Our sincere sympathies are extended to both victims of this crash, first and foremost. Following a car accident in New York, we understand that it can be difficult to focus on anything other than your recovery. However, it is terribly important to know that you may have substantial rights moving forward.

Our New York accident attorneys at Hach & Rose have devoted their lives to those who have unfairly suffered due to the actions of another party or other irresponsible entity. We realize that there is nearly nothing as difficult as dealing with the effects of a sudden collision, and we are here for you 24/7 to answer any questions you may have at this time.

If you have suffered injuries in a New York car accident due to no fault of your own, please do not hesitate to call 212-779-0057 today.