Coram, Long Island, NY (March 26, 2019) – Early on Tuesday morning, March 26th, authorities responded to an apartment fire that completely destroyed the building and tragically resulted in the death of a 71-year-old woman. The fast-moving fire was reported to have taken place at the Fairfield Apartments on Country Club Drive at 2:45 a.m.

According to authorities, a security guard called police after noticing the flames, which prompted responses from local firefighters. Police officers helped to rescue several residents and pets as firefighters worked to extinguish the blaze. One firefighter fell through a floor while battling the fire and was reported to have suffered minor injuries.

After the fire had been knocked down, responders discovered the body of 71-year-old Susan Harelick who had made it out of her apartment but collapsed and was struck by falling debris. One of Harelick’s neighbors, who is on oxygen, suffered injuries as well and was taken to Stonybrook University Hospital for treatment. That victim has since been released.

The fire was reported to have started in Harelick’s apartment and the cause is currently under investigation. 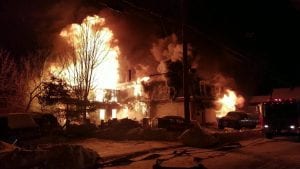 We would first like to extend our deepest condolences to the loved ones of Susan Harelick during this tragic time. Additionally, we also hope for full recoveries of both the injured resident and injured firefighter. Many fires and explosions in New York prove to be critically injurious or fatal, as they are one of the most dangerous situations that anyone may face at any time, and we thank our brave firefighters for risking their lives for the members of our community.

After such a perilous event, it is essential to realize that you may have the right to be compensated, particularly if your suffering has been caused by the actions of another party. At Hach & Rose, we are here for you 24/7 to answer any questions you may have in regards to your involvement in a fire. If you have lost a loved one or suffered injuries in a New York fire or explosion due to no fault of your own, please call 212-779-0057 today.