Haverstraw, NY – Family of 8 Intentionally Struck by Vehicle Outside 7-Eleven on Central Highway

Haverstraw, NY (February 21, 2019) – A family of 8 that was standing outside a 7-Eleven along Central Highway in Rockland County was reported to have been struck twice by a vehicle on purpose, according to police. The incident was stated to have happened at around 2:00 p.m. on Wednesday night, February 20.

The incident occurred after an argument broke out between the family and the driver of the vehicle, identified as Jason Mendez, 35, of Washingtonville. Following the argument, witnesses stated that Mendez proceeded to drive his car into the 7-Eleven, striking all 8 family members. According to police, Mendez then reversed his car and drove into the family a second time.

The argument started between the Mendez and 35-year-old Sean DeLoatch, the father, who had asked Mendez not to smoke around his kids. Sean’s wife, Melissa Castillo DeLoatch, 32, was reported to have jumped in front of a stroller when she was struck. It was later determined that Melissa was pregnant with her 7th child.

Emergency medical crews arrived at the scene and transported Melissa to a local hospital, where she was later pronounced dead. Sean, as well as 11-month-old Unique DeLoatch, 2-year-old Heaven DeLoatch, and 3-year-old SJ DeLoatch, were all seriously injured in the incident. Three older children, 10-year-old Layla Castillo, 7-year-old Mason Castillo, and 5-year-old Benjamin Castillo, were also hospitalized with non-life-threatening injuries.

Mendez has been arrested and charged with second-degree murder and seven counts of attempted murder. 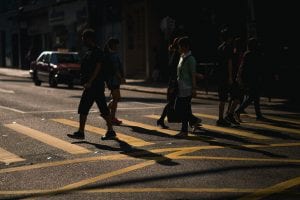 Our deepest condolences are first and foremost offered to the loved ones of Melissa Castillo DeLoatch, as we extend our most genuine sympathies to the injured father and children, who we hope will all recover smoothly. After such a devastating and blatantly criminal pedestrian accident in New York, it becomes terribly important to know that the victims may likely have significant rights.

Our New York accident attorneys at Hach & Rose have devoted their lives to guiding the victims of reckless drivers along the often complex path toward obtaining the compensation they deserve. If you have lost a loved one or suffered injuries in a pedestrian accident due to another party, please don’t hesitate to call 212-779-0057 today.