Poughkeepsie, NY (December 4, 2018) – Firefighters were called to the scene of a large fire that broke out at around 1:48 a.m. on Monday morning, December 3. Fire Chief Mark Johnson stated that four people were tragically found dead at the scene of the fire which engulfed a three-story building located at 61 Academy Street in Poughkeepsie.

The building that caught on fire for unknown reasons was reported to be abandoned at the time of the incident, and that no one was expected to be inside. Heavy fire was reported to have engulfed both the first and second floors by the time firefighters arrived on the scene.

Emergency medical responders were unable to save any of the four people who were inside the building at the time of the fire. The cause of the incident seems suspicious since the building was believed to be abandoned and no utilities were hooked up at the time.

No further information has been released as investigators are currently working to determine what may have caused the deadly fire.

First and foremost, we would like to offer our genuine condolences to the family members and friends of the four people who sadly lost their lives during this fire. We also wish to courteously extend our appreciation to the New York firefighters who risk their lives each and every day. 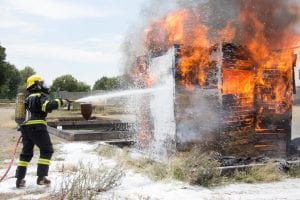 Fires and explosions in New York often prove to be fatal or terribly injurious as they are one of the most intimidating conditions that anyone can face. Following such a difficult occurrence, it is important to know that you may have the right to be reimbursed for the loss of a loved one, particularly if death was caused by another party’s carelessness or criminal behavior.

At Hach & Rose, our devoted New York accident attorneys believe in helping those who have been affected by the actions of another person or entity, such as a manufacturer or landlord. If you have suffered injuries in a New York fire or explosion, please call 212-779-0057 and let us put our experience to work for you today.