Lewisboro, NY (March 15, 2019) – A house fire that was reported on Smith Ridge Road Wednesday, March 13, left the homeowner with serious burn injuries, according to authorities. Firefighters and police arrived at the scene after the fire broke out at an unspecified time in the town of Lewisboro.

The fire was discovered by police who were called to the area due to reports of a man running through the neighborhood for unknown reasons. The home on Smith Ridge Road was discovered to be fully engulfed in flames, prompting responses from firefighters and emergency medical crews. The homeowner, identified as 58-year-old Stephen McMahon, was reported to have been found in nearby woods and suffering from burn wounds.

McMahon did not appear to be mentally sound as he became combative with medical responders who were eventually able to transport him to Westchester Medical Center. No further information has been provided as authorities are currently investigating the cause of the fire. 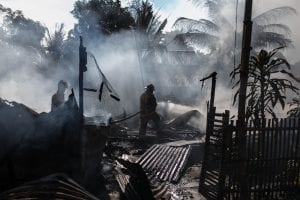 We would first like to extend our deepest sympathies to Stephen McMahon as we hope for his full recoveries. Additionally, we would like to offer our appreciation to the brave firefighters who risk their lives each day for the members of our community. Many fires and explosions in New York prove to be extremely injurious or fatal as they are among one of the most hazardous situations that anyone may encounter.

Following such a serious event, it is important to understand that you may have the right to be compensated, especially if your pain has been caused by the inattentive or criminal actions of another party. At Hach & Rose, we realize that there are few things as difficult as dealing with a sudden injury, and we are here for you 24/7 to answer any questions you may have at this time. If you have been hurt in a New York fire or explosion, please don’t hesitate to call 212-779-0057 today.