Corinth, NY – Four Hurt in Head-On Crash Between Truck and Ambulance on Route 9

Corinth, NY (February 27, 2019) – Four people were hospitalized on Monday morning, February 25, after a Hadley-Luzerne Ambulance collided head-on with a pickup truck. Police and emergency medical crews responded to the serious collision on Route 9 at 10:39 a.m.

Police reported that the ambulance had been traveling south along Route 9 and was transporting a patient at the time, although emergency lights were not activated. While driving, the ambulance collided head-on with a pickup truck that had been heading north. However, authorities have not stated which vehicle veered into which lane or how the accident took place.

Police are likely to be continuing their investigation into the incident, as no further information has been provided at this time. 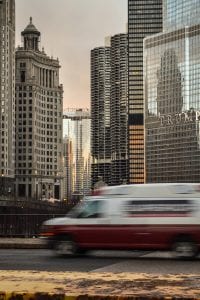 Our sincere sympathies are currently extended to all four injured victims, as we maintain hope for their full recoveries. Many car accidents in New York often prove to be fatal or very seriously injurious, particularly those which occur head-on or at a high rate of speed. While it can be terribly difficult, it is important for victims to realize that they may likely have significant rights at this time.

At Hach & Rose, we understand that there are not many things as overwhelming as dealing with a sudden injury. As members of the community, our compassionate New York accident attorneys are here for you 24/7 to answer any questions you may have. If you have been hurt in a New York car accident due to the actions of another party, please don’t hesitate to call 212-779-0057 today.