Greece, NY (February 25, 2019) – A fiery crash that resulted in the driver of that vehicle becoming trapped and seriously injured took place following a police chase that occurred on Sunday morning, February 24. The incident happened shortly before 3:00 a.m. along West Ridge Road, near Route 390.

According to authorities, a police officer had attempted to pull over 20-year-old Jimmy Montgomery, when the young man decided to leave the scene and travel down Route 390. While following Montgomery, the officer stated that he turned off Route 390 and onto Vintage Lane, where he crashed into a tree at the intersection, subsequently causing the vehicle to catch fire.

Emergency medical responders were able to attend to Montgomery, who was found to be unconscious after a police officer was able to extinguish the fire. Montgomery was immediately transported to a local hospital in critical condition.

An investigation is currently ongoing in order to determine the exact events that led to this incident. 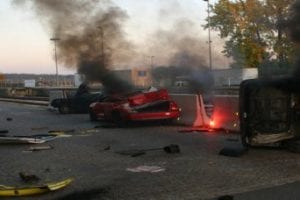 At this time, we would first like to extend our sympathies to Jimmy Montgomery, as we maintain hope for his full recovery, despite his reckless behavior. After a New York car accident, it is terribly important to realize that as either the victim may likely have significant rights moving forward, in the event that they are not to blame for the accident.

At Hach & Rose, our New York accident attorneys have dedicated their lives to helping the victims of reckless drivers and other irresponsible entities. We realize that immense physical, emotional, and financial burdens commonly arise in the aftermath of a serious accident. If you have suffered injuries in a motor vehicle crash due to the actions of another party or entity such as a manufacturer, please don’t hesitate to call 212-779-0057 today.