Lyon Mountain, NY (February 12, 2019) – A large fire was reported to have broken out at a home located at 6 Second Street in the town of Lyon Mountain that tragically claimed the life of one man. According to responders, the blaze occurred on the second floor of the house and trapped 22-year-old Codi Smithers in a bedroom, subsequently resulting in his death.

Authorities stated that Smithers’ father, 49-year-old Christopher Smithers, sustained burn injuries to his torso, hands, and face, as well as smoke inhalation, as he attempted to reach his son through heavy smoke and massive flames. The fire occurred at around 2:00 a.m. on Sunday morning, February 10, just before the father called 911.

Firefighters, paramedics, and police arrived to find Codi deceased in an upstairs bedroom after extinguishing the fire. Emergency medical crews transported Christopher to University of Vermont Health Network, Champlain Valley Physicians Medical Center in Plattsburgh where he was then transported to University of Vermont Medical Center in Burlington. His condition has not been stated at this time.

The cause of the fire is still under investigation. 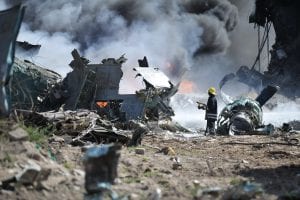 We would first like to extend our deepest condolences to the loved ones of Codi Smithers, above all else. Of course, we also extend our sincerest sympathies to the victims’ father, Christopher Smithers, as we hope for his full recovery and commend him for his efforts.

Tragically, many fires in New York can be fatal or cause terrible injuries, as they are one of the most perilous situations that anyone may encounter. Following such a dangerous event, it is extremely important to know that you may have the right to be compensated for your losses, especially in the event that your suffering was caused by the negligent or criminal actions of another party.

At Hach & Rose, we understand that there are few things as difficult as a sudden injury and nothing as devastating as the loss of a loved one. As members of the community, we are here for you 24/7 to answer any questions you may have at this time. If you have lost a family member or suffered serious injuries in a New York fire, please don’t hesitate to call 212-779-0057 today.