Altona, NY: Two People Hospitalized After Being Pinned Between Cars

Altona, NY: Two People Hospitalized After Being Pinned Between Cars

Altona, NY (November 9, 2018) – On Friday, November 2, two people were taken to the hospital after a vehicle struck a parked car where two individuals were standing. The accident took place at an unspecified time while the victims were standing between the two parked cars before one of those vehicles was hit by a speeding driver.

The victims have been identified as 68-year-old Charles Rinn and 69-year-old Theresa Rinn, both of Mooers. According to police who have been investigating the incident, the two victims were standing between two parked vehicles in the driveway at 876 Plank Road at the time of the accident. David S. Leonard had been traveling east on Smith Road when he blew through a stop sign at the intersection with Plank Road.

The 2007 Volvo S80 that Leonard was driving continued off the roadway and struck a fence before crashing into one of the parked cars in the driveway of the aforementioned residence. The impact of the collision pushed the struck vehicle into the other car, subsequently pinning the victims between the two.

Leonard was not injured in the accident and received tickets for failure to stop and unreasonable speed.

We would first like to offer our sympathies to the victims of this accident as we maintain hope for their full recoveries. Car crashes and pedestrian accidents in New York are among the most disastrous situations anyone can incur, and our attorneys are here for you 24/7 to assist you in any way you need. 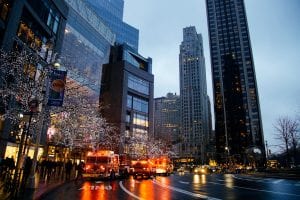 At Hach & Rose, we are driven to help victims recover compensation for their losses during such a stressful time. If you have been hurt by a reckless driver, please don’t hesitate to call 212-779-0057 today.